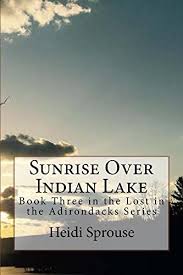 You’ve fallen into the Lost in the Adirondacks series with Adirondack Sundown and The Edge of Forgiveness on Blue Mountain. Continue the journey with Sunrise Over Indian Lake…

Can a life gone wrong be made right? Woodsman Kane Johnson is haunted by this question. Forced to live the life of a recluse by a father who was scarred by the Viet Nam war and took his family into hiding in the wilderness, the woodsman was driven by despair and desperation to steal a woman when he was faced by the loss of his family. Kane had everything taken away from him when conservation officer Graham Scott rescued the abducted woman and took Johnson into custody.

Now a fugitive, Kane has attempted to pick up the pieces of his shattered life and make something good come out of the bad. When Scott’s daughter turns up missing during a camping trip on Blue Mountain Lake, the woodsman’s life will become entangled with the conservation officer yet again. It will feel like a Catch-22 as Kane takes two steps forward only to be forced to take three steps back while tragedy after tragedy befalls him. Will he be able to begin a new chapter in his life or will the bridge to the future be burned as his past refuses to be buried?

See how the series began with Adirondack Sundown  and The Edge of Forgiveness on Blue Mountain. The fourth in the series, Deserted on Lake Desolation, is due out this summer.